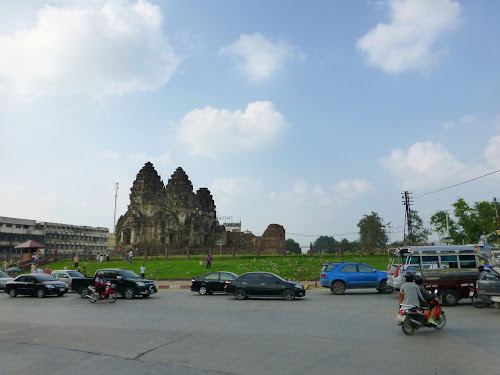 Lopburi is a small town north of Bangkok that looks to be about the size of my own hometown of Anniston, Alabama. Downtown, the main road splits in two, circling a grassy square. There, you’ll find three things: temple ruins (more than 350 years old), tourists, and hordes and hordes of monkeys.

The ruins look a bit out of place in the heart of town, surrounded, as they are, by a non-stop stream of traffic and a sprawling local market. The monkeys, though, look right at home. In fact, they own the place. 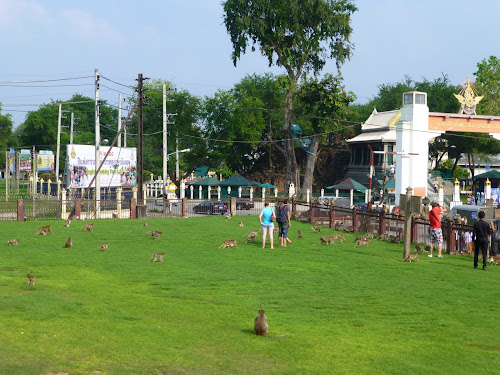 Given their integration with human life, it is tempting to call them tame. They are anything but. They are accustomed to humans — and tourists in particular — but these monkeys are not pets. There is a reason that guides and temple workers carry long, heavy poles.

Not long after we arrived, we watched this local woman making her way down the busy city street with a basket of monkey food to sell tourists: 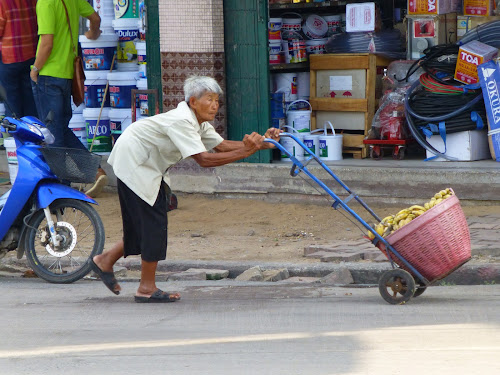 It took the monkeys about five seconds to spot her. They approached in a group of three, slinking up from behind their victim on silent little monkey feet. As one sprang at the woman, the other two worked the basket. She shouted and kicked. The monkeys kept up their cooperative attack, though, alternating roles as necessary, until all three left with their hands full of fruit.

When I first approached the ruins, I thought I’d crouch down and capture a photo at a monkey’s eye level: 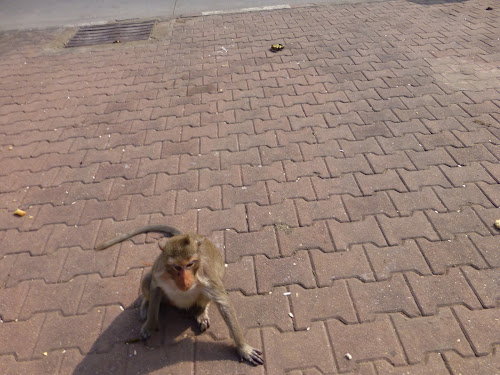 As soon as he saw me crouching down, this little fellow rushed me, growling and snarling. A local woman waved at me, saying, “Back! Back! They bite!” From that point on, I was very happy to capture photos from a standing position (the better to run when necessary).

Not all the monkeys were that grouchy, though … and some were, in fact, cute: 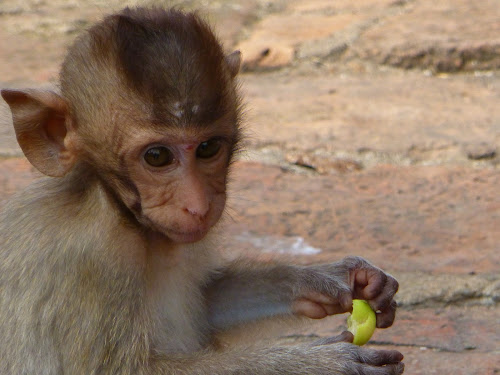 In general, they ignored us … until a local vendor sold Clyde a bag of sunflower seeds. Gentle Clyde opened the bag, approached a monkey, and showered a few seeds on the ground at the monkey’s feet. The monkey responded by charging forward, screaming at the top of its lungs, and ripping the bag out of Clyde’s hands. That was 20 baht quickly spent, and we declined any further opportunities to contribute to the monkeys’ dietary needs.

Later, one little fellow — no bigger than a kitten, and just as cute — slipped up to say hello to Clyde: 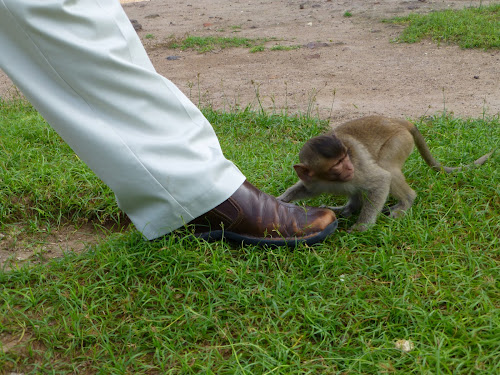 Clyde stood perfectly still. The little critter hugged the ground and crept closer. Finally, he came up to Clyde’s shoe … and bit into the leather. No harm done … but it seems to tickle the monkeys to see us giants leap around and squeal when a baby nipped at our toes. (Later, while I was peering into my camera, the same little type crept up to me and gummed at my ankles … and, again, the point seemed to be recreational.)

Japanese tourists cannot resist feeding the monkeys or taking their photos or doing both at the same time, and some pay a price for this: 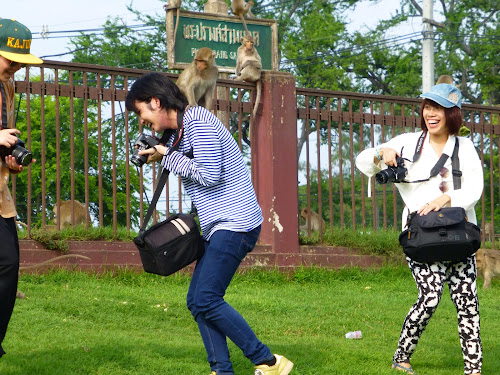 This fellow leaped up onto this woman’s neck and wouldn’t hop down, no matter how much she ran in circles and batted at him. Finally — after he went through her pack — he jumped off when he was good and ready. 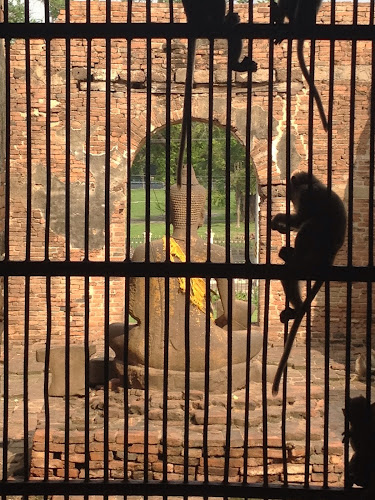 From inside the ruins, it looks almost as though the monkeys are in a cage … and then you realize that they are running free … and you’re the one who’s behind the bars.