On a cruise? A tour with MyMalteseGuide.com helps you see more in Valletta.

In your mind’s eye, imagine a massive Babylonian temple: steep-sloped walls, bricks the color of desert sand, an oasis of palms at the top. Now, make your imaginary temple impossibly wide, stretching out to cover several city blocks. Then, make it taller and steeper: at least twelve stories high. Finally, polish every single brick to a slick, glossy shine.

If you’ve managed this mental exercise successfully, you’ll have in mind a rough approximation of the fortified city of Valletta on the island of Malta. The city itself, built by the Knights of St. John (the Baptist), was the unassailable hub of state- and church-sponsored piracy for centuries. (Piracy for piracy’s sake was frowned upon, but piracy in the name of God was considered a good Christian practice.)

The end result? A city dotted with churches so wealthy, the walls are studded with golden monograms … and so much silver that one ton of silver candlesticks in the Co-Cathedral of St. John was once saved by offering Napoleon’s raiders two tons of silver from other congregations.

So: holiness and avarice existed side by side — and that’s just the beginning of Valletta’s split personality. There’s reverence for history here, but there’s also a casual disdain for it. A high-dollar architectural consultant recently demolished one of the historic city gates, replacing it with an angular “V for Valletta” gouge in the city wall. Is the solution more efficient? Sure — but I’m not sure efficiency at the expense of authenticity is the best strategy for a historical site.

As a tourist, you’ll pass through this entrance to Valletta and be confronted with more contradictions. On the left, you’ll see historic buildings with two-Euro per day public housing added to upper floors (and a Burger King on ground level). Progressive! And on the right, original, historic, and authentic buildings have been demolished (by the same architect) to make room for angular modern offices designed to evoke the essence of Valletta while also erasing it. Progressive! (But perhaps not in a very good way.)

Remember the aforementioned Knights? Set aside any ideas about Sir Galahad, doing good deeds while prancing about on a white horse. The Knights of St. John took vows of poverty and accepted a mission of healing the sick … then, enriched by church-sanctioned piracy of Turkish goods, went on to build themselves palaces. One result: the cathedral here is unlike any other, from the murals on the walls to the gravestones in the floor. Have a look:

In the aforementioned mural, which dominates the ironically-named sanctuary, you’ll see the pagan goddess Nike proclaiming victory over the dark-skinned Turks, trampling their miserable bodies in the dust. On the right and left, two Knights (and high-profile donors) are pictured. One, in the act of serving the sick, doesn’t even bother to look at the wretch he’s helping; instead, he mugs for the “camera.” (In case you feel compelled to suggest he was probably a very modest fellow portrayed in a negative light by the artist, you should know this is the same fellow who’s stamped his golden initials all over the walls.)

Even in death, their lavish lifestyle continued. The knights are laid to rest beneath intricate, hand-carved stonework marked by a level of complexity and artistry found nowhere else on the planet: 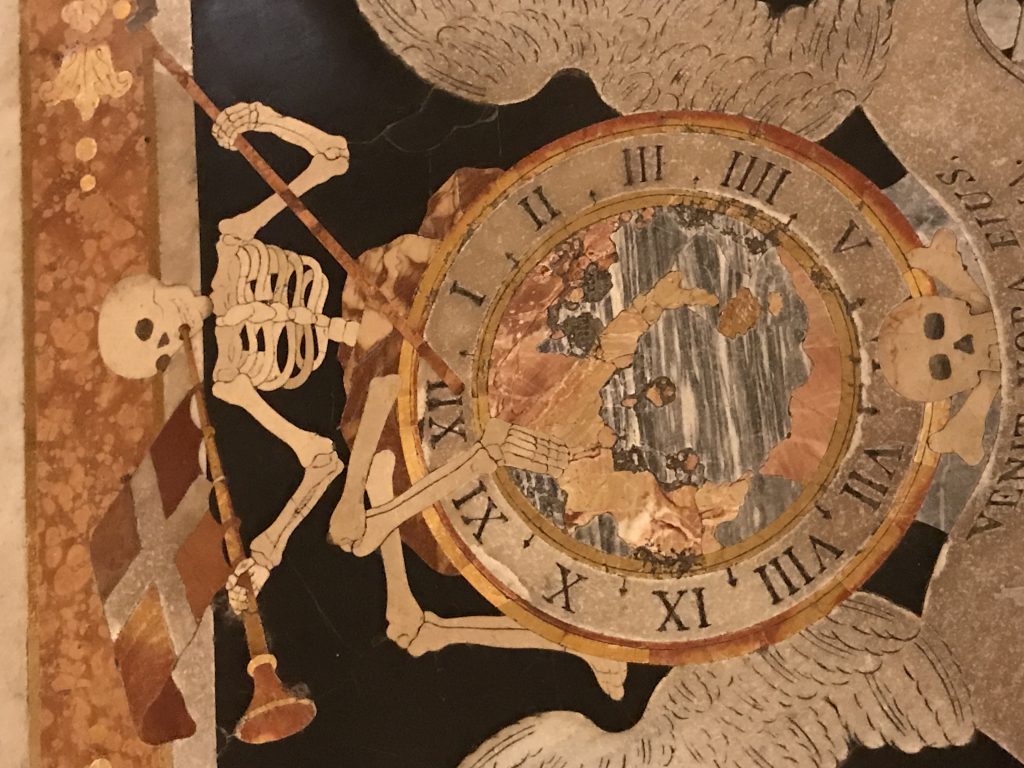 So that’s what you get in Valletta, a seaside city that’s ancient and modern and accessible and remote all at once. Outside Valletta, Malta itself awaits exploration: desert-climate villages, rocky fields overgrown with prickly pear cactus, and immersive geological wonders like the Blue Grotto.

And, on the far end of the island, a reminder that we are not, by far, the first people here. Malta is host to two dozen or so Neolithic temples. Their stone domes and walls predate the pyramids by a thousand years, but because their builders had no written language, their purpose (and the reason for the population’s sudden disappearance) remains a mystery.

If you’re planning a trip to Malta, expect to spend at least a day or two in Valletta itself, making time to hear the cannons fire at noon. Schedule a walk through town with MyMalteseGuide, a reasonably-priced personal guide service with knowledgable guides, and do ask them to take you out to the fishing village of Marsaxlokk, where you can dine on fresh fish and locally-grown oysters.

Cap off your stay with a visit to the Neolithic temples (the best in the region, and far superior, in terms of their immersive and evocative qualities, to those you might see in Gozo), and you’ll have made a great day of it.

You Can Do This!